When the sun is shining, there’s not a cloud in a perfectly blue sky and your children are begging you to play outside instead of going to the gym — it’s really difficult for even the most strong-willed gym-mongers to hit the weights.

It’s possible to get a great workout by upping the ante on the games you play with your children, said Kristy McCarley, creator of Shazzy Fitness DVDs ($29.99 for two DVDs at shazzyfitness.com), who isn’t surprised that the sunshine draws hordes of people away from traditional fitness exercises.

“As a mom of two and founder of a fitness company, I’m often asked about ways to incorporate healthy activities into family playtime,” McCarley said.

One of her favorite basic games to play with children of any age is hide-and-seek.

“The kids usually end up running pretty quickly since they only have a short time to find a place to hide, so a cardio workout is already built in,” McCarley said.

She chooses hiding spots that are as far away from home base as safely possible, and adds in a little strength training by climbing small hills or rocks. You can hide in a plank position or in a squat for even more strengthening.

An easy one for families to do together is a scavenger hunt water balloon game, in which the only equipment needed is water balloons, Eykel said. Hide the balloons throughout your yard — the more balloons, the better the workout. Then, as an optional entry point to the game, each parent (or just one if only one is participating) forms a yoga posture such as downward dog, which the children must enter through in order to begin playing.

Then, she said, everyone races to see who can find the most balloons. Whenever you find a balloon, you must throw it at any other player.

“So, the faster you run to find them and throw them, the drier you stay,” Eykel said.

Parents who have a pool — but are tired of swimming laps — will benefit from playing games in the water because water is 800 times more dense than air. That makes it harder to move your body through, said Tom Kleeman, orthopedic surgeon, fitness trainer and creator of “MD Fitness: The Doctor’s Workout” ($24.99 for the three-disc set at thedoctorsworkout.com).

“This means that you can build muscle and improve cardiovascular health with water exercise,” Kleeman said. “In addition, since water removes the effects of gravity, it is easier for people with arthritis or weight problems to move more comfortably in a water-based environment.”

Some fun water fitness games include the classic Marco Polo, which is essentially a water version of hide-and-seek. “Marco” closes his eyes, calls “Marco” while everyone else screams “Polo,” Kleeman said. “Marco means you are burning calories at a higher rate than land-based hide-and-seek,” because of the water’s resistance.

Another great pool game is an inflatable raft race, which would require you to paddle your way as quickly as possible from one side of the pool to the other, he said.

“The paddling motion is a great arm workout, and you are also working your abs as you bend at the waist to paddle the floats,” Kleeman said.

A treading water contest works your arms and core muscles and is great for aerobic endurance, while a water treasure hunt (dropping coins in the water) is fun for everyone involved and works the entire body, he said.

Anyone with a backyard or even access to a park can set up an obstacle course, which can be a great workout for the entire family, said Kim Truman, a celebrity personal trainer whose clients include Mark Cuban, owner of the Dallas Mavericks, and actor Kevin Sorbo.

You could put anything in your obstacle course — and this would depend on the ages of your children, but she had some of her own fitness suggestions.

“Set up six to eight spots for your circuit,” Truman said.

In one spot, do 10 jumping jacks; set up another for hula-hooping; bounce a basketball 10 times and then throw it into an empty bucket or trash can; toe-touch hops reach to the sky (reach down and touch your toes, then swing your arms up and jump 10 times); cone drills — have a set of at least five rubber cones, and run in and out and back to the first cone and repeat (if you don’t have cones, you can use towels or water bottles); beetle bug situps — lie on your back and assume normal situp position, but bring your knees and upper body together like a bug, and stay in the position — and do 15 of them.

“If you want to make it more fun, have everyone start off standing in each spot, and one person blows the whistle to switch going clockwise,” she said. 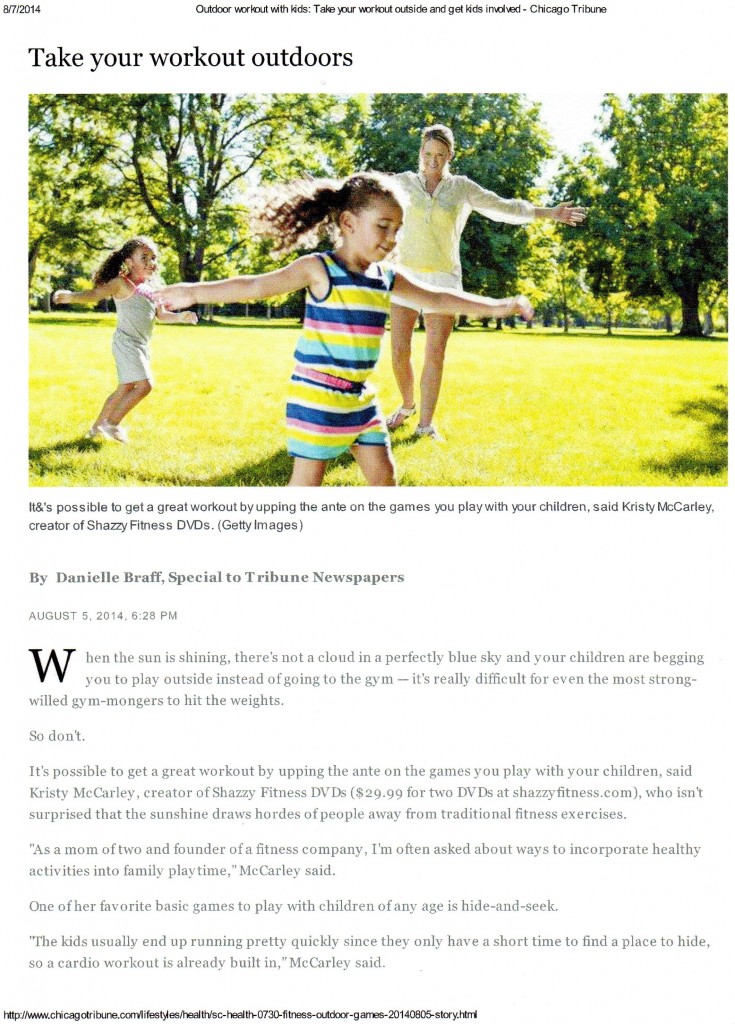 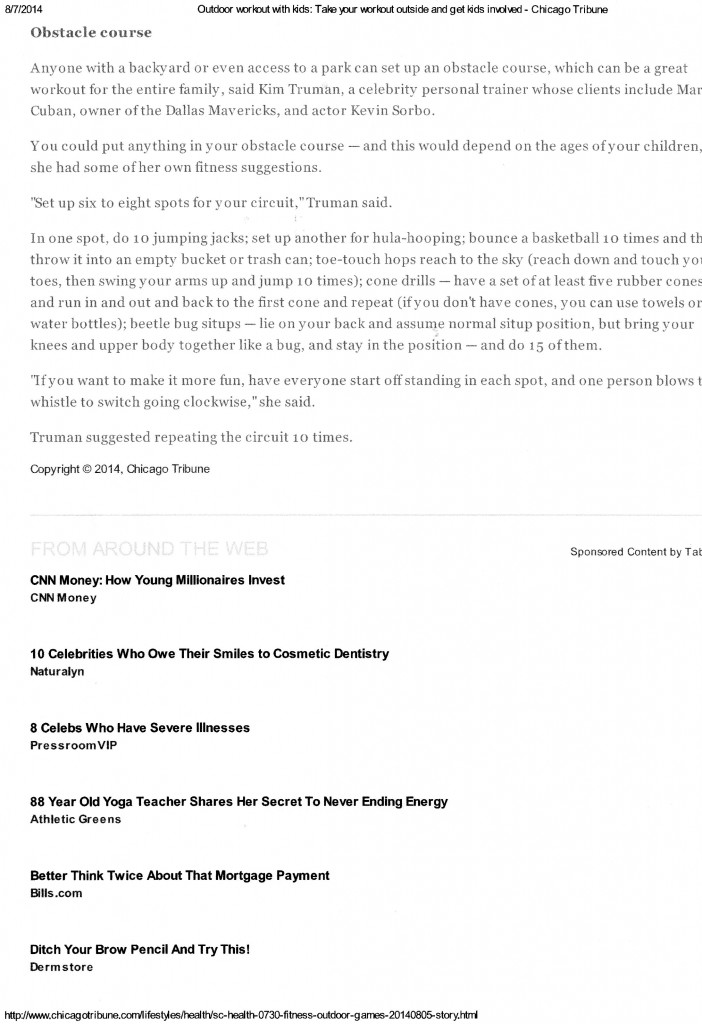